Anthrax is a serious disease caused by Bacillus anthracis, a bacterium that forms spores. By forming dormant endospores, the bacteria is dispersed into the environment and can be inhaled, ingested or contact the skin. These spores may remain dormant for years and are resistant to heat, desiccation, and disinfection. The case fatality rate for cutaneous anthrax is 10-20%, while inhaled anthrax is 30-70% fatal. Anthrax is not known to spread from one person to another and its prevalence in the United States is sporadic. Bacillus anthracis is a NIAID Category A Priority Pathogen. The Tufts New England RBL is registered to work with Bacillus anthracis.

Brucellosis is most often caused by Brucella abortus, a small coccobacilli that infects both cattle and humans. In humans, it is the result of ingesting unpasteurized milk products or raw meat. Brucellae behave as intracellular parasites, and are highly communicable and resistant to various environmental stresses. While not life-threatening, symptoms can remain chronic, causing abortions in cattle. Brucella species are NIAID Category B Priority Pathogens.  Work with Brucella can be done at the Tufts New England RBL upon request.

Burkholderia is an aerobic bacteria that causes Glanders disease in equidae (through B. mallei) and meliodosis in humans (through B. pseudomallei). The bacteria evades and destroys the host immune system, causing septicemia, abscesses, and pneumonia. With treatment, there is a 50% case fatality rate. Although antibiotics are available, these pathogens are highly virulent and mutate quite rapidly. Burkholderia are NIAID Category B Priority Pathogens. Registration is pending for work with Burkholderia at the Tufts New England RBL.

Clostridia are rod-shaped bacteria that produce neurotoxins that can affect humans and animals. The bacteria forms anaerobic spores that, when ingested or inhaled, cause flaccid muscular paralysis. It is the main paralytic agent in cosmetic “Botox”. Clostridium botulinum toxins are NIAID Category A Priority Pathogens. The IDGH is registered to work with Clostridium botulinum toxins; registration is pending at the Tufts New England RBL.

Tularemia is caused by Francisella tularensis, a zoonotic intracellular bacteria. The type and severity of the disease may vary, but infection is mostly through tick bites, skin contact, or inhalation. The case fatality rate is upwards of 30% if untreated. Although infectivity rates are low, this bacterium is highly virulent and can be aerosolized. It is naturally found throughout the United States and has many mammalian hosts. Francisella tularensis is a NIAID Category A Priority Pathogen. The IDGH and Tufts New England RBL are registered to work with Francisella tularensis.

Tuberculosis (TB) is a lethal infectious disease caused by strains of mycobacteria. It attacks the lungs and is spread through transmission of respiratory fluids in the air. There are a wide range of symptoms and treatment requires a cocktail of antibiotics, which has led to drug resistance. Although rare in the United States, it is widespread in developing countries in Asia and Africa. Tuberculosis, including drug-resistant TB (MDR TB and XDR TB) are NIAID Category C Priority Pathogens. The Tufts New England RBL is registered to work with TB.

Plague is historically one of the deadliest human infectious diseases. It is endemic to the Western US and is frequently found in prairie dogs. Plague is caused by a small coccobacillus, Yersinia pestis, and is transmitted by fleas to rodents and humans. The disease takes three main forms: pneumonic, septicemic, and bubonic. Yersinia pestis is a NIAID Category A Priority Pathogen. The Tufts RBL is registered to work with this pathogen.

Q (query) fever is a zoonotic disease caused by the intracellular bacteria Coxiella burnetii. This disease is endemic to cows and sheep but can be transmitted to birds and humans by inhalation. It is environmentally robust, demonstrating resistance to desiccation, UV light, and acid. C. burnetii is arguably one of the most infectious organisms, requiring a very low dosage (1-10 organisms) to produce disease. Despite this, it is rarely fatal and clears up spontaneously in humans. Coxiella burnetii is a NIAID Category B Priority Pathogen. Research with Coxiella burnetii can be done at the Tufts New England RBL upon request.

Hantaviruses are a class of RNA viruses in the Bunyaviridae family. Human infection is through contact with rodent urine, saliva, or feces. There are two potentially fatal forms, Hanta Hemorrhagic Fever with Renal Syndrome (HFRS) and Hantavirus Pulmonary Syndrome (HPS). There are no known antiviral treatments but recovery can occur naturally with support. Hantaviruses are a NIAID Category A Priority Pathogen. Work with hantaviruses can be done at the Tufts RBL upon request.

Influenza is the general name for RNA viruses of the family Orthomyxoviridae, which infect both birds and mammals. Spread in seasonal epidemics through aerosolized respiratory secretions or contact with bird droppings, common symptoms in humans include fever, malaise, and coughing. Although vaccines are available, the number of worldwide pandemics due to new strains has encouraged research in viral genomics and epidemiology. As a zoonotic disease, influenza has been documented in birds (avian influenza, H5N1) and pigs (swine influenza, H1N1). Influenza is a NIAID Category C Priority Pathogen.  Work on influenza can be done at the Tufts New England RBL upon request.

Severe acute respiratory syndrome associated coronavirus (SARS-CoV) is a zoonotic viral respiratory disease. It presents with flu-like symptoms and is transmitted through aerosolized respiratory fluids. Although it is a relatively rare disease, it is highly transmissible and there is currently no cure or preventative vaccine safe for use in humans. SARS is a NIAID Category C Priority Pathogen.  Work on SARS can be done at the Tufts RBL upon request.

Arthropod-borne viruses, or arboviruses, are a group of viruses that require an arthropod vector for transmission. Initially, these viruses are nonpathogenic before being transmitted via saliva to vertebrate hosts. Most arthropod vectors are ticks or mosquitos. Disease normally presents with fever and malaise, but can progress to encephalitis and hemorrhagic fever. Eastern equine encephalitis (EEE):  Found in the family Togaviridae, this zoonotic arbovirus is endemic to the Eastern United States, including Massachusetts. It is transmitted from mosquitoes to a wide range of mammals, but presents strongly in horses and humans. Disease prevention in horses is through the use of vaccinations. Strongly related to EEE is Venezuelan equine encephalitis virus (VEE) and Western equine encephalitis (WEE). WNV, EEE, VEE and WEE are NIAID Category B Priority Pathogens.  Research with arthropod vectors can be accommodated in the Tufts New England RBL insectary.

Found in the family Flaviviridae, WNV is a mosquito-borne zoonotic arbovirus found in temperate and tropical climates around the world. Birds are the primary reservoir host but the disease can manifest in other mammals. In humans, nearly 80% of the cases present no symptoms, but in those that do, it progresses to encephalitis, meningitis, or poliomyelitis. There is no vaccine available against WNV at present. Research on WNV can be accommodated in the insectary at the Tufts RBL.

Enterotoxins, or protein exotoxins, are produced by the bacterium Staphylococcus aureus and have a significant effect on the gastrointestinal tract. They are cytotoxic as well as heat and water-stable, allowing them to form pores in the epithelial cells of the intestinal wall; this leads to excessive vomiting, diarrhea, and abdominal pain. Of particular interest is Staphylococcal enterotoxin B (SEB), a common cause of food poisoning. SEB is a superantigen, and because of its stability, if aerosolized, it can cause toxic shock syndrome and multisystem organ failure. 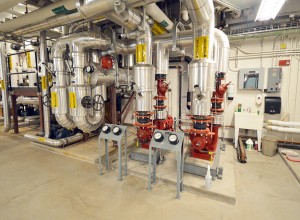 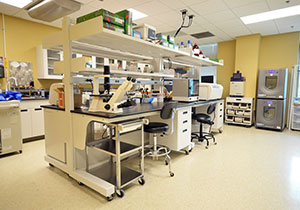